What Madoff Did – Part 1

If the people from Enron are considered “The smartest guys in the room”, then Bernie Madoff is definitely the “The biggest pig in the pen”.  Maybe the dirtiest too! The numbers vary but Bernie Madoff ran a $64.8 Billion dollar Ponzi scheme , finally running out of money in December 2008. He ran his scam for nearly five decades. Let’s take a look at who he was, how he did what he did and how he got away with it.

A Ponzi scheme is a fraudulent investment operation where the operator, an individual or an organization, pays returns to its existing investors from new  investors, rather than from profit earned through legitimate sources. Operators of Ponzi schemes usually entice new investors by offering higher returns than other investments, in the form of short-term returns that are either abnormally high or unusually consistent. It is named for Charles Ponzi, who ran the scheme in 1920. Here is a photo of him:

For example, let’s say one of Bernie’s salesmen approaches you and says that they “have a guy” that can guarantee you a twenty percent return, year after year. A reasonable person would know that this is a scam, but lets just say to go for it and invest $100,000.

At the end of the first year, you get your twenty percent and account statement that shows your account is now worth $120,000. Two things to know:

1.) The statement that you have is fraudulent. Someone typed it up, made it look real and mailed it to you. This is what Madoff did. He had a whole department of people creating fictitious statements and trade confirmations. (more on that another day)

2.) You go to withdraw the $20,000 and the check arrives promptly and clears your account just fine. This money came from investors that signed up after you. No trades were done or maybe some trades were done and lost money, whatever. New investors pay off old investors. If you stick around long enough, and enough people sign up after you to keep the scheme going, you just may get your original investment back.

Here is what Madoff statements looked like at one point: 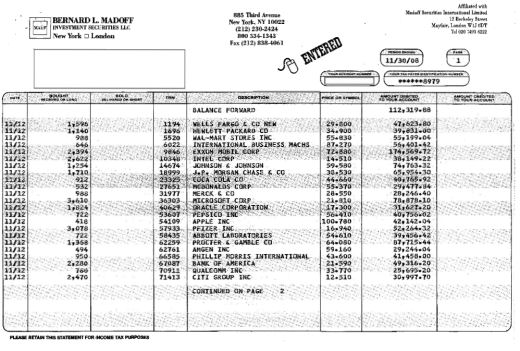 Bernard L. Madoff  was born on April 29, 1938. He was born into a middle class family. Time and again as a kid, he was spurned and humiliated for what was perceived to be his inferior intellect. As his friends excelled in school, he fell helplessly behind. He was rejected by one girl after another for his shortcomings and was relegated to lesser classes and lesser schools. He developed an inferiority complex early in his childhood and equated esteem with money

Bernie was also the low man on the totem pole at home. His brother and sister were excellent students that went to elite colleges. Bernie went to the University of Alabama, which was a curious choice for a kid from Queens, NY. At the time, kids from the Northeast generally attended  the southern university because it was notoriously easy to get into. He transferred to Hofstra after his first semester to be closer to his future wife, Ruth. Bernie’s brother Peter, went to law school and became a lawyer. Bernie dropped out of law school after one year, deciding that it wasn’t for him.

Upon graduation from college, he set up his own shop as a stock broker. Bernard L. Madoff Investment Securities came into existence when its owner and founder was only 22. He was shut out of trading in most of the bigger companies of the time so he concentrated his practice on the sale of penny stocks.

In terms of being in the security business, a nefarious one at that, it seems that the apple didn’t fall from the tree. Madoff’s father Ralph, was a plumber by trade but at some point began running a rogue trading operation along with his wife out of the family’s living room. This was in the 1950’s, when Bernie was at Hofstra. Bernie worked as a stockbroker for his father even though he didn’t yet have a stock brokers license. It was explained that he was clearing his trades through his father, who supposedly had a stock brokers license, though there is no evidence that he ever held one. It turns out that Bernie’s mother actually had two securities companies registered to her name. Apparently, Bernie and his father were trading stocks illegally. Finally, in 1963, the SEC caught wind of the operation and it was shut down that year.

The combination of an inferiority complex and self esteem based on money and success, along with the example provided by his parents, probably made Bernie into the monster he became. I’d like to think that Bernie, or anyone, really wanted to do well for his clients and got himself into a bad spot that he was never able to work his way out of.  After learning more about Bernie and his personality, I’m not so sure about that. Either way, at some point in time, Bernie reconciled with himself that there was nothing wrong with what he was doing. He was a megalomaniac and an introvert at the same time. While he didn’t seek the spotlight, for obvious reasons, he didn’t decline it either. He relied on other people to market him.

Many of Madoff’s clients were already extraordinarily wealthy. Some of them were billionaires. Driven by greed, are they not , in some way, partially responsible for their own financial ruin?  That’s not for me to judge but it’s worth a thought. Madoff had 4800 clients.  Many of them became wealthier than they could ever imagined, depending on how early they got in. Were these people the other pigs in the pen with him? As I will show,so many people made a ridiculous amount of money from Bernie, and from referring clients to Madoff, that I think you will agree that he wasn’t the only monster here.

Betrayal: The Life and Lies of Bernie Madoff by Andrew Kirtzman