What Madoff Did -Part 2

An apple rots from the core. Eventually, the whole apple is bad. And so it was with Bernie Madoff, hereafter appropriately referred to as “BM”. BM was the rotten core but everything around him went bad too. By greed or by association, the closer you got to BM, the worse the stench.

BM started off as a penny stock broker. He had a small amount of office space in his father in laws accounting business. He cultivated the skill of networking, which is a modern day word for having someone else find your clients for you. He set up a “feeder system” where people would be paid commissions for referring business to him.

BM married Ruth Alpern in 1959. Ruth’s father, Saul Alpern, was a New York accountant who began to steer money to Madoff’s company from customers he knew in Queens or met while playing bridge over hot water an lemon at summer resorts in the Catskills. Hundreds of frugal retirees ultimately lost their savings because of following Saul’s recommendation from decades earlier.

Alpern’s accounting office was located in Manhattan, on East Fortieth Street between Fifth and Madison Avenues. Among Alpern’s employees were two accountants named Frank Avellino and Michael Bienes. These two made a fortune feeding money to Madoff. The accountants guaranteed rates of return between 13.5 percent and 20 percent. According to SEC documents and people who were involved at the time, many of Avellino and Bienes’s clients had no idea of Madoff’s role in the business. Whether or not, these two accountants knew that BM was running a Ponzi scheme is not known. One of them lost all of his fortune when BM went belly up.

One of the largest feeders was a hedge fund called Fairfield Greenwich. The fund was created by Walter Noel and Jeffrey Tucker. Among other things, Fairfield Greenwich established the Fairfield Sentry Fund that would go on to become one of the largest feeder funds, and one of the largest victims of BM, with over $7 Billion invested with him. With a feeder fund, the advisory fees that investors pay are almost always split between the feeder and the fund manager. In this scenario, BM charged Fairfield no fee, which meant that Noel and Tucker’s firm were making $100 million per year for doing virtually nothing but funnel the money to BM. Not a bad gig, ay?

BM claimed that he made his money by charging 4 cents per share on the trades that he made, so he could afford to let the feeder funds keep all of the profits. If you’ve spent a day in the investment world, you know that no one gives up fees like that. The fact that these people accepted the fees without questioning it tells you that they were either idiots, pigs, or both.

Walter Noel deserves a few more words here. To expand his empire and bring in even larger profits, Noel enlisted the help of his five gorgeous, highly educated daughters. The Fab Five daughters were married to five highly educated husbands. Four of his five sons in law joined him in his business, setting up offices in Europe and South America, to recruit new investors whose money could be steered to Madoff, so Fairfield Greenwich could collect their extravagant fees. According to Massachusetts Secretary of state, William Galvin, one of Noel’s sons in law and his partner, Andres Piedrahita, a Colombian who operated out of Madrid, earned more than $45 million in 2008 alone.

Noel and Tucker and their sons in law told their clients that they deserved their large fees because it could guarantee access to Madoff and make sure it was a safe investment that no one had to worry about.

What Was Madoff’s Alleged Investment Strategy?

BM pitched people on what he called a “Split Strike Conversion Strategy”.

A normal person would call it a “Collar” or a “Fence”. The objective of the strategy is to

2.) Buy a put contract on the asset

3.) Sell a call option on the same asset to finance the put purchase

Here is an example: 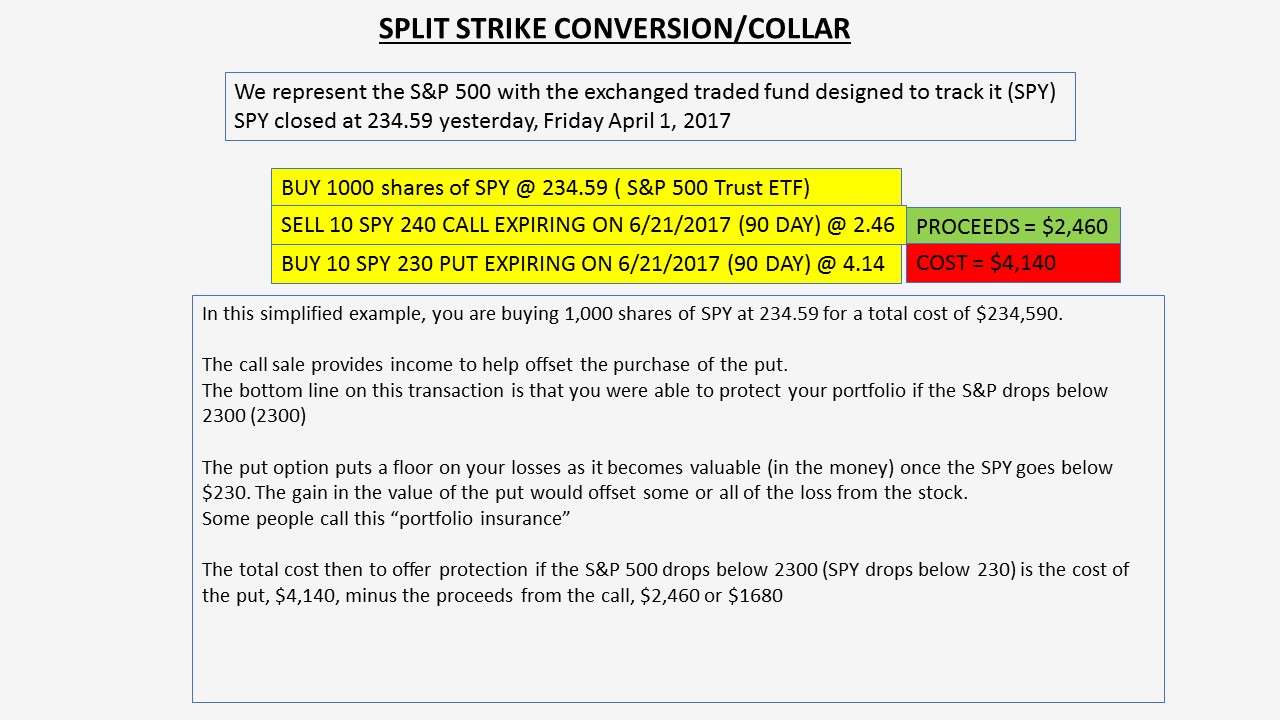 BM was supposedly buying a basket of 30-35 stocks from the S&P 100  and then putting the collar around the S&P 100 Index. His claim was that he was able to buy the stocks at just the right time and would flip the money into US Treasury Bills when the conditions were not conducive to the strategy.

The very fact that the call option limits the upside of the trade shows that this strategy would not produce the outrageous returns he was guaranteeing.

DISCLOSURE: This article was written for informational purposes only. It is not intended as investment advice and should not be relied upon as such. Consult with a qualified financial advisor or tax professional to determine the proper investment plan for you and your circumstances.

Options are not suitable for all investors. There are risks involved in any option strategy. Individuals should not enter into option transactions until they have read and understood the option disclosure document titled “Characteristics and Risks of Standardized Options,” which outlines the purposes and risks of option transactions.

SOURCE Madoff Chronicles, The: Inside the Secret World of Bernie and Ruth